As I headed out the door for the 41st running of the Mercy Health Glass City Marathon I was both nervous and excited that race day was finally here.  I was excited because it was finally time to start, run and finish the 26.2 miles of this race.  I was nervous because I was going into it with minimal amounts of training and another round of IT Band issues, which was the reason I had to back out of this race the first time.  I knew the pain would set in, I just wasn't sure when, and what I was going to do when it did. 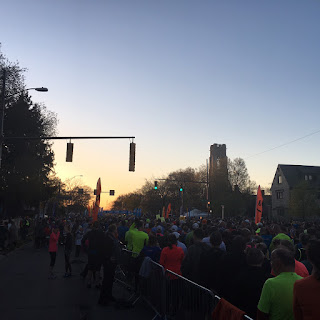 The weather was picture perfect, and other than being just a little to chilly while waiting in the corrals for the gun to go off, almost no wind and clear skies as the sun came up made for a beautiful start.  I told myself over and over as I made my way across the starting line to run my own race and don't let others control my pace.  I knew that if I went out to fast I was going to be in big trouble so I treated this like it was just another long run, I picked a pace and stuck to it no matter what was going on around me. 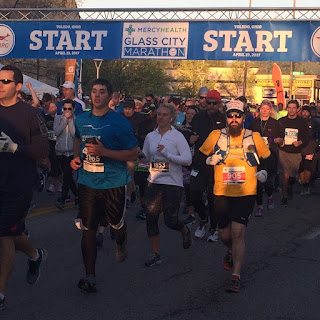 Things were going pretty darn well up through mile thirteen until I got greedy.  I was feeling really good at that point with my pace sitting right around a 10:00 mile average.  I started to let thoughts of speeding up and letting my potential finishing time cloud my judgment.  BIG MISTAKE.  I started to push the pace by almost a minute and it took no more than a mile to aggravate my IT Band.  It was at that time I had to come back to reality and slow things back down.  This is also when the walk breaks entered the conversation as well.  Walking usually calms the pain down in my knee so once the pain subsided I returned to a 10-10:30 avg pace.  I was able to grind out a mile or so before I would have to walk it out for a couple of minutes, and this strategy got me through the next few miles. 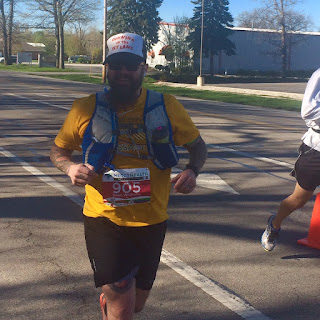 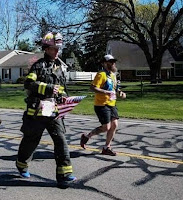 Right around mile 19 I had caught up to my fellow race ambassador, Brian, who was taking a walk break just as I needed to take one as well.  Brian is a firefighter in Sandusky, Ohio who runs almost every race in full firefighter gear.  He originally started competing in endurance events because he was 50 pounds overweight and at risk for heart disease.  He found performing the basic fire ground operations became exhausting and difficult, so he knew he had to make a change.  Did you know that 40%-50% of all In-The-Line-Duty deaths on the fire ground are related to heart attacks and strokes, I never would have thought that with all the other dangers they encounter.  Brian is now in the best shape of his life and runs almost every race in full gear to bring awareness to firefighter health and to raise money for the Fireman Rob Foundation .  I hung with Brian for the next couple of miles as we both would push each other to run just a little more.  It was just what we both needed to get us through and finish at our own pace.

So at mile 22 I pushed on at a 11 minute mile pace trying to finish this race without walking anymore, unfortunately that was a pipe dream.  By the time I started mile 26 I had only taken a couple of short walk breaks and was getting pretty tired, but I was so close I could taste it.  I switched up my playlist to a group of songs that would get the adrenaline flowing and push me to the end.  The unfortunate byproduct is I always end up cranking up the pace as well and with just over a half mile to the finish my IT band let me know just who was boss at that point.  Walking wasn't even an option I needed to just stop because it felt like I couldn't even bend my knee it was so tight.  I tried a couple of stretches to loosen things up, but wasn't much help.  About another minute went by when a gentleman I had passed earlier came up and stopped his race to check on me.  I was leaned over trying to massage my IT band and all he said was "come on, lets go get our medals".  I looked up at him, smiled and we started to jog it out together. 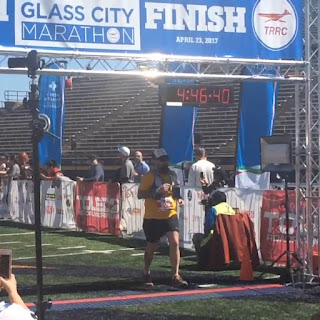 The last 50 yards was amazing.  Running down the finishers shoot lined with people cheering for people they don't even know like they have known me for years is a incredible feeling and a humbling experience.  I crossed the finish line where the race director, who I've known for years and years, was there congratulating all the finishers gave me a hug and a high five.  I ended up with a finishing time of 4:43:40, which is right about what I was thinking before the race began.  After I received my medal I almost wanted to think that all of the shit I've gone through that kept me from this race until now was because this year's medal was so f-ing badass compared to years past.  The medal was huge and featured some great Toledo imagery showing inside the overall shape of the state of Ohio. 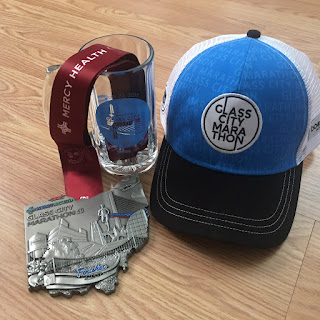 Once I felt like I had my feet under me again my parents and I headed down to the after party to get my free commemorative beer mug and a little post race chow.  The live entertainment on stage was a band that is fronted by one of my long time friends from high school who I was also in a band with.  Between songs he started picking a few notes from one of our old original songs then he asked if I wanted to hop on stage for old time sake and hit the skins.  It was a blast to get back behind a drum kit again even if I was tired from running a marathon. lol :) 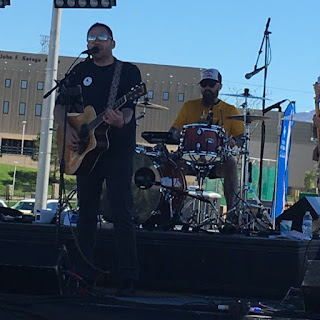 In the end, I would have to say other than a few minor little things I would change about the race, you would be hard pressed to find a fault with this race.  The race director, the race board that makes all the decisions, the Toledo Roadrunners club, the police and fire and the hundreds and hundreds of volunteers did an amazing job.  The Mercy Health Glass City Marathon may be just a small hometown event compared to a Columbus, Chicago or Detroit, but man this crew treats it like it is one of the marathon majors.  Every year they seem to make it bigger and better without losing that hometown intimate feel.  Oh and if you are looking for a great race to qualify for Boston, this is it.  A little over 22% of this year's finishers qualified and so could you.
Posted by Dean at 5:31 PM 1 comment:

With the race just days away I am sure everyone is excited to get to the starting line and get going. Before any of that can happen you'll need to stop by the Health and Wellness expo to pick up your race BIB and your packet of goodies. To pick up your packet you will need your ID and your race number.  How do you get that you ask, well the RaceJoy App is the answer. Download the app, type in the event and your name and poof, your BIB number will appear.  Below is a bunch of great info about all the awesome features this app has to offer you on race day!

With the mobile Mercy Health Glass City Marathon app you can experience: you can fully experience the race. Share RaceJoy with your friends and family and ask them to sign in as a spectator. If you carry your phone, they can track you live and send you audio cheer clips. The Mercy Health Glass City Marathon is once again offering participants and spectators an innovative race day experience with the RaceJoy mobile App. With the App, you can find key information about the race weekend, including bib numbers; schedules; FAQs; places of interest; course maps; race news; etc. We are also offering real-time information, like progress alerts as you cross timing points on the course; and scored results within moments of crossing the finish line. You can have your progress posted automatically to Facebook and Twitter while you are doing the race. Your supporters and spectators simply need to tap the “Timing” button in RaceJoy. There is no charge for them to track your official race progress.
If you carry your phone and want to increase your Glass City Marathon experience, you can do live phone tracking and cheer sending by tapping the “PhoneTrak” button and purchasing the 99cents App upgrade. Spectators can also purchase the upgrade and track you live on a course map, send you cheers and get “NearMe” alerts as you get closer to them. Note: These upgrade features require you to activate tracking in the App within 30 minutes of the race start time.
After the race, you can go to the “Buzz” area in RaceJoy to review your progress alerts and replay any cheers sent to you.

There is no need to carry your phone for these features since they are based on your bib tag. — See How it Works! 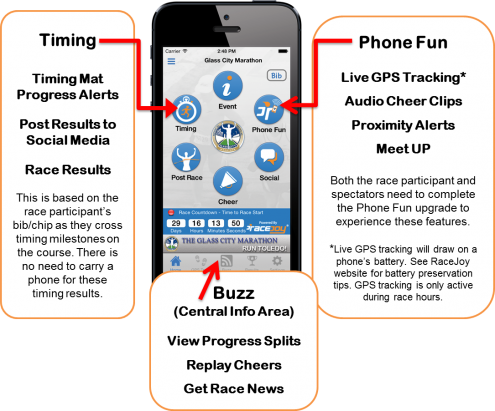 
I am sooooo psyched about this year's finisher medals for the Mercy Health Glass City Marathon.  While I was bummed I wasn't able to earn the marathon medal last year for the 40th anniversary I don't like it as much as I do compared to this year's medal.  If I have to crawl through the finish line to get one I will!!!!!! 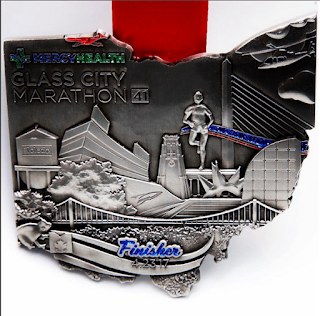 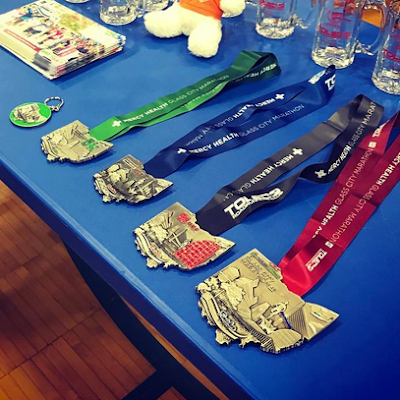 What To Do In Toledo

While Toledo may not be the biggest city in Ohio, it sure packs a lot of stuff to do in it.  Here are three examples of fun for the whole family.  CLICK HERE, for a full list of activities, parks, places to visit, restaurants and drinking establishments.

Imagination Station
A wonderful facility in downtown Toledo that features a hands-on science museum with over 300 exhibits for children of all ages.

Toledo Zoo
This year features newly renovated Aquarium houses 3000+ aquatic animals in 178,000 gallons of water – nearly four times the volume as the previous Aquarium.  As an institution with a more than 100-year history, The Toledo Zoo understands the need to preserve the past even as it reaches out toward the future.  The Toledo Zoo is one of the world’s most complete zoos—it’s also the region’s top family destination! Let The Toledo Zoo take you from the Arctic tundra to the wilds of Africa, from the tropical rainforest to the Sonoran Desert and all points between—all in one great day.

Toledo Museum of Art
The Toledo Museum of Art is an internationally known art museum located in the Old West End neighborhood of Toledo.  It houses a collection of more than 30,000 objects and special one of a kind traveling exhibits throughout the year.  The museum was founded by Toledo glassmaker Edward Drummond Libby in 1901, and moved to its current location in 1912.

Whether you want updates of how you are doing while you run or your friends and family want to follow along as you traverse the 26.2, 13.1 or 3.2 miles, you can do so with the official race tracker.  With the mobile Glass City Marathon app you can fully experience the race. Share RaceJoy with your friends and family and ask them to sign in as a spectator. If you carry your phone, they can track you live and send you audio cheer clips. 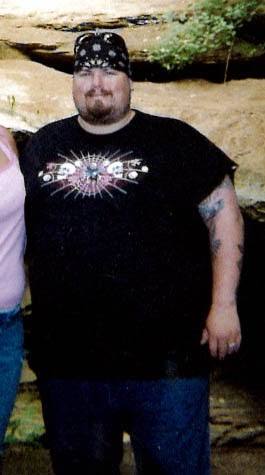